This development is the first large scale mixed-use development project approved for the Herndon Transit-Oriented Core district right next to the metro since the town’s 2030 Comprehensive Plan was adopted back in 2012. The parcel to be developed is approximately 4.34 acres and will include 3 towers with a maximum height of 120′ on Tower A, 275′ on Tower B, and 225′ on Tower C. The development may be built in 3 separate phases, similar to the towers at the Wiehle-Reston East Station, so final building heights aren’t finalized, but 12 story, 23 story, and 24 story buildings are planned with a maximum of 400 residential units, 430,000 square feet of office space, and 25,000 square feet of retail space. It is worth noting that the plans give the option for a future 250 room hotel development.  Retail spaces will be located along Herndon Parkway to maximize retail visibility and accessibility along with wider sidewalks, urban landscape features, and furnishings recommended by the town. A cycle track and sidewalk, separated by a landscape buffer and trees, will be added to as a safety buffer between the pedestrian zone and traffic on the parkway.

The plans include 3 entrances off Herndon Parkway with a loop road around the building and a publicly accessible plaza in the center. According to the staff report on January 14th, “The project is designed to allow the three phases in any order and the garage for each phase is designed to connect with the abutting phase(s)’ garage(s) to create a single garage at full build-out. According to the plan, the three buildings would have an approximate combined gross floor area (GFA) of 813,637 square feet and a total of 1271 parking spaces.” A minimum of 475 residential parking spaces( 1 per unit), 650 office parking spaces, and 17 retail spaces are required with a portion of the parking underground, illustrated below. The developer would have located more of the parking spaces underground, but due to rock formations beneath the surface they are limited to a mixture of above/below ground parking. 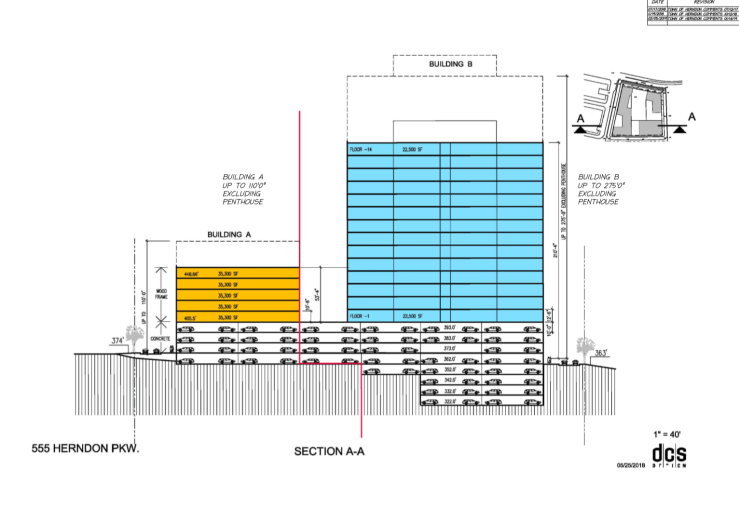 The town of Herndon put a lot of emphasis on easy access in and out, requiring Penzance Properties to clearly define the loop road around the buildings in their plans before it was approved. Based on the expected traffic increase, town staff are requiring a traffic signal at the western most entrance once Building B is developed but for now, the nearest future pedestrian signal would be part of the bus-bay project approximately 400 feet to the west of the parcel. Traffic is already congested at the intersection of Van Buren Street and Herndon Parkway during rush hour and the town’s Metro Area Study recognizes that improvements will be necessary, not only for the new development but town-wide to accommodate the increased densities permitted.

This project is the first of many to come off Herndon Parkway between Van Buren Street and Spring Street, which we’ve already seen start with Van Mitre over-under townhome community. Quadrangle Development Corporation has plans under special exemption review for a development off Fairbrook Drive, Marriott is investing in renovations to update the Countryard Hotel, there is a Hilton Garden Inn and Home slated off Sunset Park Drive, not to mention Kiddar Capital purchased the Booz Allen Hambelton building at 575 Herndon Parkway back in February 2018. A lot is in store for this slice of Herndon real estate, also known as the “HTOC” district. Total site build out is planned for 2022, as it is assumed the metro Silver Line extension will be complete by then.

That also means I have my work cut out keeping you informed on these future developments! Hope you found article informative and subscribe if you would like more updates.

(Images via Herndon Planning Commission. Here is a link to the site plans for more details.)